Kreznik(Крезник) is the planned Capital of the PCBSSR (Project City Build Soviet Socialist Republic) otherwise known as the PCB Soviet State. Founded by Jake_Mu with the help of Cavemaker and many others. It's theme is based off of Soviet and Russian style buildings and architecture. It is also the spiritual successor of Jakegrad, a long forgotten Communist town which fell to capitalists during the Lucite Civil war.

The first settlers to the area of modern day Kreznik were simple farmers and herders trying to forge a life in the blistering cold of the northern mountains of PCB. They had no real connection to the outside world other than the odd very adventurous and those who dared to travel the harsh passes to other far reaching villages. These early people worshiped a wide variety of deities but seemed to focus around one main Deity named Kresnik, a farmer who became a warrior king that was granted Godhood and guardian of the Sun. He was known for gifting his people fire and granting them warmth during the coldest of days to survive. It is he who the eventually peoples of the land named their city.

(Loosely based off of the south Slavic god Kresnik)

The beginnings of many settlements in the modern Kreznik area came from several Slavic migrations and Scandinavian expeditions. One such was by a Viking Oleg of Rokgorod(рок-город) who looked to make a name for himself and founded the first major Slavic state, the Kresnik Rus. Over time the minor Norse military aristocracy has merged with the native Slavic population to start the beginning of the modern Rus identity. Although not known for any major advancement or expansions Oleg and his descendants would use the area of Kreznik as their staging ground for raiding campaigns in other nearby settlements, kingdoms, and states. One such being the city of Malleus where they would pick up Greco-Roman influences such as religion and written law. These people would also over time would be absorbed into the lifestyles of the Rus people.

The Kresnik Rus ultimately disintegrated as a state because of infighting between members of the elite which would eventually become the petty princedoms of the area. Alongside the infighting, invasions and migrations of Hunnic peoples would accelerate the fragmentation of the Rus and the first Slavic state. These new peoples bring in new ways of life and beginning thoughts of a people in constant revolt against oppressors, whether it be interior or exterior.

(Loosely based off of the Kievan Rus, Oleg of Novgorod, the raiding of Constantinople, and the Mongol invasions)

It was during this time that the modern city of Kreznik would be officially founded. From a Simple settlement came into a modest town that led the way of exploration and navigation of the northern mountains. Kreznik and other surrounding towns would unite the surrounding areas into different princedoms at different times. Most usually falling during famines and splitting of interests. None ever gaining enough power to fully unify and projecting out into another state like the Kresnik Rus. It was also during this time when ancient paganism fell to a more monotheist religion and many people groups would be assimilated into a more wider Rus identity.

Although never unifying into any single Kingdom, many princes and high nobles found a common cause to modernize and industrialize their people and towns to compete with neighboring nations, cities, and people groups. They used Kreznik as a meeting ground where the Princes and high Nobles could discuss common trade and military intervention against those who dared oppose them. So a United Court would be founded. No one prince ever rose above the rest as petty arguments and different issues kept them ever accepting any one man to rule them all, but as a united front they were able to create a more modern military and road network that made their combined economy boom. From simple farmers came factory workers and coal miners. But as time went on the Princes and Nobles of court only became richer as the rising population under them continued to live in squalor and suffer from hunger, famine, and common diseases. From the outside the United Court seemed to be evolving into something grand, but from the inside it was crumbling with death of the common folk and lack of human rights. It was only time before these men who thought themselves above everyone would fall under their own thoughtlessness for others outside the court.

All it took was a spark, a death of a refugee. This refugee was from a far away city called Jakegrad, a city fallen under capitalism caught up in a war of deferring interests between two opposing sides. Similar to their own problems the people saw these refugees as fellow humans and embraced them as such. Similar to the war happening in this foreign land the people of Kreznik saw that it could also happen to them. All it would take was opposing princes to split the court and war would overtake everything they knew. Empowered by the ideals that these new people brought the common folk began to organize into Unions for better pay, better housing, and better standards of living. They petitioned the court for better human rights and a voice of their own outside the United Court into a common census. The Court denied them as they saw this as nothing more than the weak trying to take what was theirs by birthright. Protests and strikes started to pop up all over the lands of the Court and none more than in the Common Meeting City of Kreznik. The People were tired of the United Court and rose up to overtake them and dispose of any who thought themselves as better than the common man. And it all started with the death of one of the communist refugees to spark the Revolution that became what Kreznik is today.

Although there were many bumps in the process like counter revolutions that had to be put down, and totalitarian dictators vying for power. Eventually the people would rally behind the unions that brought them their freedom and would use them as a base for sending representatives to represent the citizenry. Creating the beginning of a common senate for the people that became The Senate for the PCBSSR. It was the Unions and the people in them that created the laws, not a High Court or some power hunger Leader, but the people themselves. Also during this time the Leaders of the Senate would send prisoners and criminals to gulags far away from them, believing it was for the best for their citizens. Sovisk being one of these places. But eventually they would come to their senses and would set up more humane prisons and rehab centers.

The Uniting of The Soviet State (Today)

Kreznik along with other cities, even those as far away as Sovisk, would unite into a unified Soviet State: the PCBSSR. Whose goal is to bring unity and progress to all corners of the map. They stand for the common people and the rights that it brings of just being alive. Projecting themselves with a strong military, a strong industry, free trade, and a common senate where all the people can be heard. There is only one party, the people's party. Where anyone can bring their concerns to their common Workers Union representative who can bring it to the Senate and they can deal with it there. It was during this time the Red square was built in honor of the hardworking people.

Over time Kreznik would once again boom in population and density and would become the capital of the new Soviet State. Using its infrastructure and powerful military to lead the way forward and protect the State in this world still full of Monarchists, Capitalists, Tribals, and even futuristic societies. It is because of all this that Kreznik is what it is today. 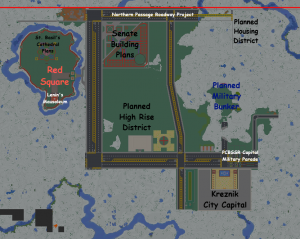