The PCB World Expo 2018 was the second Creative 1.12 event of its kind, succeeding the PCB World Expo 2015[1]. It included eight participating countries (in order of the results): Australia[2], France[3], the United States[4], the United Kingdom[5], Italy[6], the Netherlands[7], Mexico[8], and Canada[9]. A leader or builder to each pavilion posted a topic on the forums to introduce the audience of the event to their countries. The host of the first World Expo, Ducky, returned alongside zwinky12 and Penguina to act as the judges for the event. On 12 August 2018, a topic on the forums was posted by zwinky12 to officially announce the event of which commenced three days later.[10] The building process concluded nearly a month later, on the midnight after 9 September. On the next day, zwinky12 introduced the winners of the World Expo via the forums.[11] The three winning countries included Australia in 1st, France in 2nd, and the United States in 3rd. All contributors to the event were then granted badges, with the top three teams receiving a gold, silver and bronze tag to represent their position. 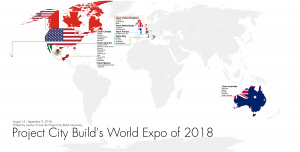 This is a world map of all the countries and their representatives participating in the PCB World Expo of 2018. The states included are Australia, France, the United States, the United Kingdom, Italy, the Netherlands, Mexico, and Canada.

Team Mexico was led by MilesNoKilometer and supported by _happybob.