From PCBWiki
Jump to: navigation, search

St. Catchpole is an island nation and fishing village, located at /warp StCatchpole. Styled after Bermudan architecture, St. Catchpole is a port city in the south-west of the Creative 1.12+ map. The island has an approximate area of 0.2 square kilometers, with 20+ buildings and an estimated population of 40 residents. The name St. Catchpole comes from the town of "Ottery St. Catchpole" located in England. It uses the currency Chen («), where one Chen equates to 20¢ in server currency.

St. Catchpole was discovered by Spanish Conquerors in 1445 when they landed on a rock on the north side beach. This rock was later moved inland to protect its structural integrity, and it is a popular attraction for tourists. St. Catchpole was then colonized by Spanish, English, and Japanese settlers, allowing for cultural diffusion to take place and let the island take on traits from each of these cultures. On April 2, 1889, St. Catchpole gained independence from Spain and began its own government with a new currency, flag and mayor.

St. Catchpole was founded in February of 2018 by sushionsale. After discovering the island and making sure it could be built upon and wasn't claimed, Sushi set to work on making the island into a fishing village and nature preserve. The south side has been kept development free and the north side was developed with a fishing town and vacation area. In October 27 of 2019, Sushi granted co-ownership to MattDB, where they would continue development together. On the same day, St. Catchpole joined the United Republic, and began building its naval and military force on the mainland. 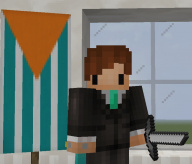