Note: The version list below does not include the "NewBigCity" map on the Classic server. 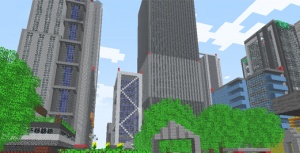 The first version of Big City

Big City was originally the showcase map of PCB's classic server. The map was accessible for viewing by any guest or member, but editable only by Adv. Builders+. 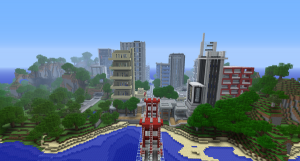 Upon launch of PCB's survival server, a second version of Big City was created to test the now larger palette of blocks available.

The most notorious change was the use of naturally generated terrain as opposed to the flat-map of version 1. Several buildings from version 1 were recreated block-by-block, including Kedji's apartment and _andy's skyscraper. Version 2 to date has been the only map to not utilize a grid-style road system.

Due to the limitations of Survival Mode, materials had to be spawned in for building. As this was before multiple maps were available, Big City was located on the same map as the survival area, but located extremely far away from the map spawn point, and accessible via a warp. During this time, there was no definitive way of knowing if materials meant for Big City were being used in players' survival creations. 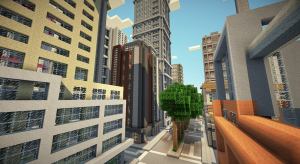 General displeasure with the terrain used for version 2 lead to the creation of Big City version 3, with the return to flat-map as a terrain. This version of Big City was located in the Creative map, which was on a separate server to the Survival map at the time. This led to a few issues with players building very close to the boundary of Big City.

The city was later used as a lobby - the first location new players who entered the server would spawn at. 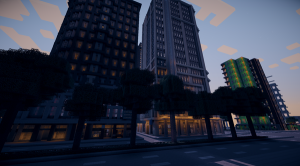 Whilst version 4 of BigCity was discarded quite early into its creation, it is worth mentioning due to the switch to a larger building scale. This version of BigCity was started to fully utilise Minecraft's newly increased build height limit, which had recently been changed from 128 to 256 blocks.

This is the current version. Big City was renamed to Monarch on the 17th of October, 2020, and all the warps were subsequently renamed.

The map for Big City version 5 is a standard flat map. At some point the map reverted to standard world generation for an unknown reason, so towards the edges of the map, large areas of vanilla terrain can be found. The floor level has been artificially raised to a y level of 23 to allow for the construction of subways, sewers, basements, and other underground structures. The map also includes a coastline along the eastern edge, and a wide river to the south of the main downtown area. While the flat terrain is very convenient for building, the complete lack of height variation in the terrain does go against the realistic style used by the structures in the city.

Based on the SoHo districts of London and New York.

The riverside area. Named such because it is the riverbank which marks the historic southern edge of Big City. It is in fact the northern bank of the river.

Located south of the river. Mostly low rise and suburban development. Currently still in the planning stages. Unlikely to ever be completed due to upcoming Version 6 of Big City.

Large roads are not to be edited without permission, although small roads may be edited to suit player's builds.

The theme of Big City is a modern city. It should be noted that this does not exclusively mean modern style architecture, rather any building which would not be out of place in a large modern day city. Big City currently takes most of its architectural influences from Australian, North American, and European cities. In particular, Melbourne, London, New York, and Berlin.

All users in this list have contributed at least one build to Big City Version 5, and are credited on the Wall of Contributors at the BigCity warp.

Major Contributors are players who have put substantial time and resources into the city. It is estimated that the founders and major contributors combined have created 70-80% of all builds within the city.