The city of Deneira is located in the Free Provinces of Nedair, in a state of semi-autonomy with the Grand Republic of Diuettium, as the most north-eastern province in the republic. The territory is mostly hilly, and massive landscaping projects to lower the hills by the Gertian Empire, to improve the city's production and massive drenages, to permit the docking of bigger ships.

The city is a blend of dutch and budapestian canals, with a massive dock. The city is still in constuction, with the starter layout almost finished. It has recently got a warp.

The city of Deenaairart (ancient name of the city) was founded in 1343 by dutch merchants in search of new trading opportunities in the black sea. The city prospered, till the rise of the Gertian empire, that blocked the access of the city traders to the silk road. That started the decline of the city, that culminated in the conquest of the city by the Gertian empire in 1464, that made the city part of the empire and forced the city to destroy the fortifications.

The first deneiran flag, made by the dutch

Under imperial occupation the city prospered, trough ingent investements by the cpital, transforming it in the trading hub of the empire, however the unrest remained and big armed forces were needed to suppress the separatist rebels. The tensions grew, until the great revolt of the 1502, that liberated the city and the surroundings. To protect itself from the empire, the city allied its neighbours that will become the Federation of the Free Cities, in 1687. During the first half of the sixteenth century, the city had a massive hungarian immigration, because of the constant Gertian raids in the hungarian countryside. The city accepted the flux of immigrants, changing the demographics of the city forever. The city was renamed Deneira, and the bonds from the allied cities grew stronger and stronger. The century didn't seen huge military conflicts, so is reputated for the historian as the great century of peace, which saw the city prosper, as the city started the trade with the slav empires of the north. During the 1600 the city was hit in a serie of disasters, that almost destroyed the city. In the year 1627 a massive conflagration from the trees in the mountains burnt the 75% of the city, killng a quarter of the population, and leaving half homeless. Then the plague reached the city in 1673, leaving the city in a terrible condition. In 1687, the city formed the Federation of the Free Cities with its allies. The leader of the federation was the city of Deneira. 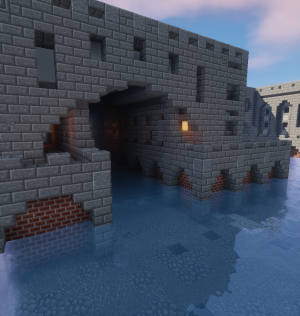 The most ancient canal of the city, built in the 1500 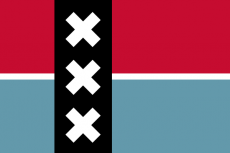 The denairan flag after the indipendence from the Gertian empire

During the first years of the 1700, the city started to recover from the plague and changed completely architectural style. Till this day, the buildings in the city are still of the first half of the eightinth century. During the 30's of the century, the first serie of canals was built, to make the local river accessible by the sea, and connect the city to the Danube. With the new connection, the city had a new expansion in the docks and a first industrial boom, focused mostly on naval industry, becoming an important industrial center. Trough the canals, the coal was imported from the Danube and the wood was brought from the northern forests. As the decades progressed, unrest increased in the city, sfociating to a revolt, that improved the working conditions of the proletariat.

Deneiran Revolutionary Flag, during the war for indipendence

During the 1800 the city becamed the most important city port in europe and an european capital for product manifacturing. The dutch heritage of the city permitted numerous investements to the city, expanding yet more the dock of the city. As the century passed, the city was influenced by multiple empires in the borders.

As the 1800 passed and turned to the 1900, the city stayed neutral during the first world war. During the midwar period, the city was struggling to maintain democracy in the country and the oligarchs of the city took control, imposing a strict control on the deneiran people. During the second world war it stayed neutral, maintaining the dictatorship of the oligarchs till' 1972, when the second republic was born and the oligarchs got exiled after a bloody revolt. During this time the young republic drew closer relations with the deneiran republic, maintaining a special status with the republic, till' the referendum for the entrance of the city into the republic.

The deneiran culture is about hope and second possibilities, as the city itself was an island of hope and freedom during the majority of its history.

Day of the golden fern

The fern is the plant of the city. During the 2nd day of december a man dresses up with a dress made of fern and walks around the city, giving wishes to the population and doing traditional hungarian and dutch dances in the streets.

The most common language spoken is a dutch variant, called deneiran dutch. This language has many hungarian words and an hungarian accent. Hungarian is the second most spoken language, as the hungarian immigrants flooded the city for the entirety of the deneiran history. Diuettan is considered the lingua franca of the city and it is widely spoken by almost the entirety of the population as a second language. It becamed more used when the city drew closer relations to the republic and immigrants camed into the city.