Charlie the Creeper was the name given to a friendly creeper spotted in the wild. As a result of a glitch in the creeper's AI, the creeper would roam around not targeting anyone[1]. He was originally spotted in the first version of PCB's survival map by players NekTM and Melatron on the 9th of April, 2011. Unfortunately due to a player hitting Charlie, the creeper's AI reactivated before shortly blowing up.

At the time, a gravestone was erected near the spawn's busiest walkway.[2]

The original PCB survival map was later temporarily uploaded onto the server, when suddenly another friendly creeper was spotted next to Charlie's grave. 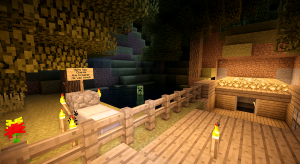