Argonta is a small and independent city state, situated in the Maccu Picchu mountains, north of Matamura. The city was founded by 4 people: Florspeed, Jorandp, LinkYen and Vicenzos. After 2 months, the city was led by Florspeed. 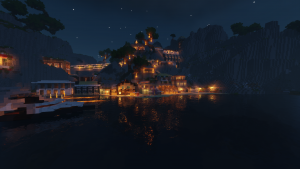 The city state of Argonta by night (November '18)

After the city was founded, the city hall was the first building to rise on the difficult mountain surface. Now Argonta has grown bigger with a port area, a beach and even a small business district. Argonta is known for it's cozy and detailed look combined with nice furniture and landscaping. The builders of Argonta don't like to remove too much of the original mountain biome, so the buildings are adapted to their environment. The station of Argonta, which was built by Asmodean connected the small city to the rest of the world, although a lot of people had complaints about the colossal bridge with the train track.

The city state counts around 5000 inhabitants, called the Argonteans. The official language is English and .ar is the internet suffix. These people can go anywhere in the city by pathways that have been constructed throughout the city, even with the difficult surface, that makes the use of a car impossible. Last month, the city's council approved the construction of a port with yachts, which brought new inhabitants to the town. If you'd pay a visit to Argonta, shaders are the best idea to improve your experience of the city. ` The city is very green and eco friendly towards it's environment, which explains the hate against the new rail track bridge. 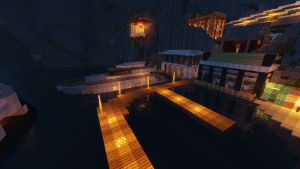 The newly constructed port of Argonta with a yacht (November '18)
Retrieved from ‘https://wiki.projectcitybuild.com/w/index.php?title=Argonta&oldid=2267’
Category: